My Android app has been live in Google Play for 6 months, but I'm still encountering strange bugs and behaviours, making big mistakes, and learning surprising things. The latest surprise has come with a recent flush of ICS users who's devices are putting more significant demands on my handling of the Activity lifecycle, specifically with relation to managing state.

tl:dr; - beware when invoking startActivityForResult that onActivityResult is invoked before onResume!

Before I get to the problems, lets have a quick look at the Activity lifecycle. I'm going to "borrow" google's lifecycle diagram: Some important things to remember here are:

With regard to the last point its worth familiarising yourself with the way Android manages Processes.

State, and the Application object

One simple way, you might think, to manage state without worrying too much about the Activity lifecycle is to use the Application object. Android allows you to specify your own class (extends Application), which your Activity's can access through getApplication.

That's nice. It needs care though, since the process that your Application object lives in can be killed and restarted at (perhaps) unexpected junctures. Take this scenario: 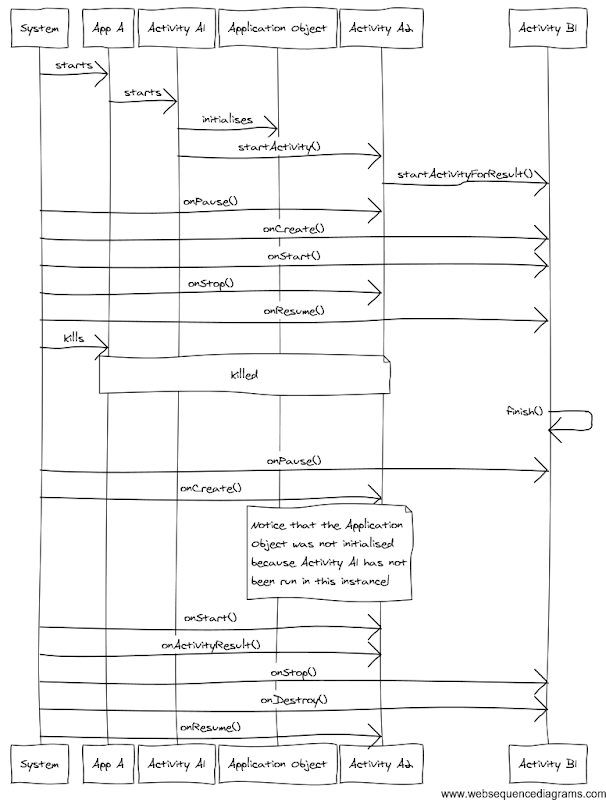 Clearly, if Activity A2 relies on A1 having run first to set up the application state, there's going to be trouble as soon as A2 starts trying to access that state after resuming from B2. If you're going to use the Application object to manage state, make sure that it is set up as part of the Application's own lifecycle methods.

On my devices I never suffered from this because my process was not being killed and the state was still present in memory at the point when onActivityResult was invoked!