DSL for XML parsing in Android

For a readability and performance comparison of different parsing mechanisms available in Android, have a look at my more recent post that compares parsing a Twitter search result using DOM, SAX, and various Pull parsing methods.

The short story: Always use SAX in Android (here's why).

SAX and Pull-parsing are fast, but don't lead to the most readable/maintainable code. Instead, how about a super-simple internal DSL for describing the mapping for unmarshalling from XML to POJO's, with pull-parsing performance? Quick example:

I recently had occasion to work on an Android app that was suffering horrible performance problems on startup (approx 7-12 seconds before displaying content).

A look at the code showed up several possible contenders for the source of the problem:

A quick run through with the excellent profiler built in to DDMS immediately showed lots of time spent in DOM methods, and masses of heap being consumed by sparsely populated java.util.List objects (used to represent the DOM in memory).

Since the app was subsequently discarding the parsed Document object, the large heap consumption was contributing a huge garbage-collection load as a side-effect.

The network requests - even over 3G - were comparatively insignificant in the grand scheme.

An obvious and inexpensive thing to try at this point was reducing the concurrency to minimise the overhead of context-switching and hopefully enable the CPU caches to be used to best advantage.

I confess I hoped for a significant improvement from this small change, but the difference, while measurable, was too small to be significant (~5-10%).

XPath is easy to use, and typically makes it possible to write straight-forward code for marshalling data from an XML document into Java objects. It is, however, horribly slow and a terrible memory hog.

I decided to try an experiment with an alternative parsing method, to see if a worthwhile performance gain could be achieved on one of the smaller documents that could then be applied to others.

I wrote a small test-case confirming the correctness of the existing parsing mechanism and testing the throughput in documents per second, then extracted an interface and created a new implementation that used Pull-Parsing instead of DOM and XPath.

However, I had one major concern that put me off: the code for parsing even a simple document was already quite long and had a nasty whiff of conditional-overkill (think: lots of if statements). I wasn't too happy about trading code readability for performance.

I pondered a few alternatives like XStream which I've used a lot for converting from Java to XML but not much the other way around, and SimpleXML which I have used previously and can be nice, but pollutes your model objects with annotations and in some situations can be a real pain to get working.

An Internal DSL for mapping XML to POJO's

In the end I decided to spend just a few hours turning the problem over in code to see if I could come up with something more readable for working with the pull-parser directly.

The result, after an afternoon of attempting to parse the most complex XML file the app consumed, was a small Internal DSL (Domain Specific Language) for declaratively describing the mapping between an XML and the Java model classes, and a 15x performance improvement in startup time for the app (7-12 seconds down to ~0.5s).

The DSL I originally came up with required some boiler-plate code to do the final mapping between text nodes / attributes and the model classes being populated. If Java had a neat syntax for closures this would have been much less irritating :)

As it was the boiler plate irked me - too much stuff getting in the way of reading what was really important. I thought about it a bit in my spare time, and had another shot at it. My aims were:

The result is starting to take shape in github as dsl4xml. It removes all of the boiler plate in exchange for a small performance penalty due to use of reflection. I don't have comparative performance figures yet, but will post some when I get time.

POJO's: See the source-code of the test-case

A minimum of garbage is generated because we're using a pull parser to skip over parts of the document we don't care about, and the only state maintained along the way (in a single-use context object for thread safety) is the domain objects we're creating.

You can create and register your own type converters. They are used only to map the lowest level xml data to your Java objects - attribute values and CData Strings. The Converter interface looks like this:

An example Converter for converting String values to primitive int's looks like this:

Most converters can be thread-safe, but some may require concurrency control for multi-threaded use (example: when converting dates using SimpleDateFormat).

You can use optimised type converters in situations where you know you will not be unmarshalling from multiple threads concurrently. An example is the ThreadUnsafeDateConverter which is used in the example above because it came from a test-case that will only ever run single-threaded.

This is still a very new project, and in an experimental stage. There's loads still to do:

I came across some interesting comments by Diane Hackborn (Android platform developer) in this thread.

Diane points out that SAX parsing is faster than Pull Parsing (at least on Android). I had been under the impression it was the other way around, hence I went with Pull parsing.

Later perf tests show SAX to be much faster on Android, so I will probably refactor to use SAX. 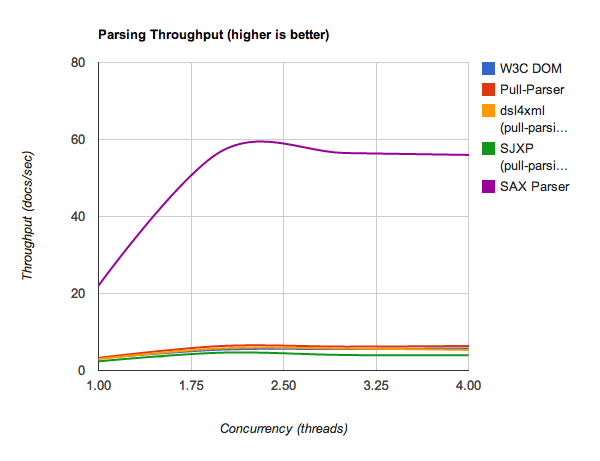