I blogged recently about building Android projects with Maven, and how we've set things up for team development using Maven, Android and Eclipse. This follow up post describes how someone joining the team would go about setting up and getting to work...

To join in the fun you need a straight-forward installation of the following pre-requisite tools:

You will then need the following Eclipse plugins:

Since you are setting up to join an existing team, most of the maven configuration has presumably already been done for you. To get working on a project (assuming it is set up as I described) you need to check out two projects:

I highly recommend checking out so that all of these projects are siblings in a common projects directory.

The biggest single difference from ADT's usual working style is that you can't (currently) work with the apklib projects as project dependencies because of this issue. Instead, if you make any changes to an apklib project, you'll need to mvn install or mvn deploy it before you can see the change in your dependent apk projects.

I found that I had to "mvn install" each of the apklib projects locally before the dependent projects would build, as the remotely deployed projects for some reason did not include the pom resource - I haven't yet had time to investigate why. 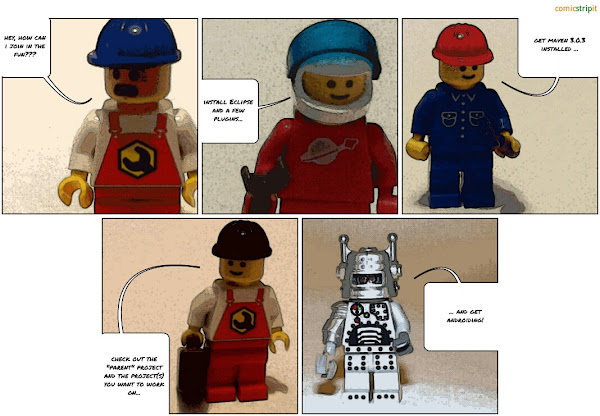 Don't install this like a normal Eclipse feature! To install M2E-Android, open an Android-Maven project and open the pom.xml. You should see that the

In the header of the pom.xml editor you should see a red error message: plugin execution not covered by lifecycle configuration....

Click the error and some details open up, including two quick fixes. Click the first quick fix ("discover new m2e connectors"). The following dialog pops up and after a short search, shows the m2e-android connector: 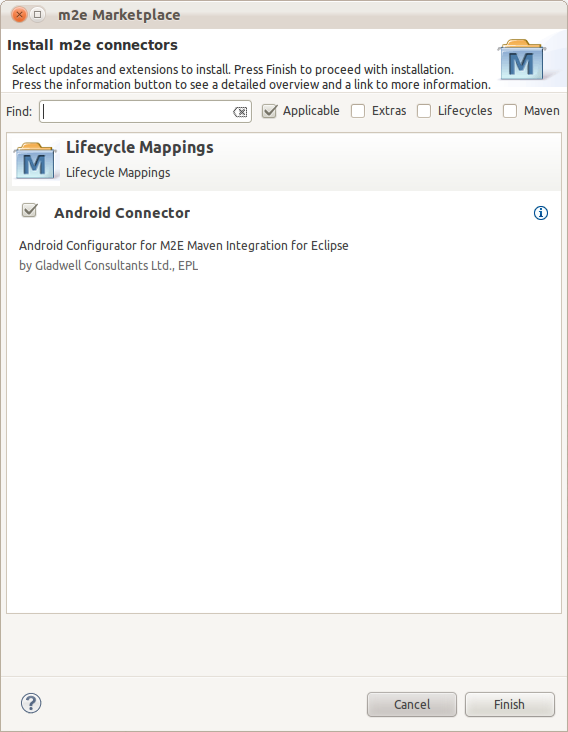 Install the connector and the warnings should go away. Actually on one of my two machines they did not - I don't know why, but I had to take the 2nd quick-fix option of turning it off in Eclipse. For me that's just about ok, as I want the maven build to be the master anyway.