I haven't blogged in a while. I've been very busy with lots of different things, but nothing sufficiently technical and juicy to write about. Some less techy and more entrepreneurial adventures have been floating around, so I though to make some notes on those.

Things have taken a strange turn at work, with a very ambitious new project in the pipeline that is quite a departure from our usual business. I am tasked to deliver both development-wise and in terms of defining the business model.

The development alone will be a monumental task. Defining a business model is … quite some way outside my experience. The budget is almost non-existent. The time-scales are horribly short. I'm not even sure I completely buy the basic premise of the project. And yet … it is still a strangely attractive prospect, and its all Eric Ries' fault.

In September last year I read Eric Reis' excellent book - The Lean Startup - and was inspired to put it into practice on my personal projects. I stopped getting hung up on the infinite details of feature-complete perfection, and started thinking in terms of Minimum Viable Product.

It led me to release my first ever solo "for profit" work, a super-simple mortgage repayment calculator.

The development part was fun, and I got an excuse to use one of my open-source libraries.

What turned out to be really interesting though, was that to get it online I had to register a domain-name and figure out how to point it at an Amazon S3 bucket, which I had to configure to host a website. Two things I'd never done before.

I also spent time researching keywords, used multiple landing pages on different sub-domains with different keyword content, and set up analytics to see which gets most traffic - following Eric's advice to scientifically test a theory.

For my second project I had a bit more time - I had a week off in the run-up to Christmas to use up my 2011 vacation entitlement. My wife was working, which meant I had a guilt-free coding week (my wife is great about me coding at home, but it doesn't stop me feeling guilty).

I used the time to introduce myself properly to Android and build upon a little idea that I'd had. It started out by me wanting to use comic-book style pictures of myself on my blog to represent topics.

I had spent time working on some java code to take a bitmap and process it to resemble an SVG. From there it wasn't much of a leap to try to make an app that lets you build comic strips from your photos, and so Comic Strip It! was born on Christmas Eve, 2011.

It really was a minimum viable product. The feature set of release 1.0 was:

I've added many features since, as directed by user feedback. Much of best feedback has come from people who emailed me directly with suggestions, especially in the early days, but some of the real kickers have come from disgruntled commenters.

In the spirit of Lean Startup experimentation I launched two versions - starting with the free version as described above then, in early january, a paid version that included speech balloons.

I've learned so much about people, product development/marketing/monetisation, and myself from having an app out there in the wild with no barrier between me and the users! My main problem now is finding a block of time to work on accelerating the growth of the user base.

Given the lack of a decent block of time to work on the app, I've spent a little time here and there on a couple of new, small, experiments. These aren't really MVP's as such, but they are in the spirit of Lean Startup. 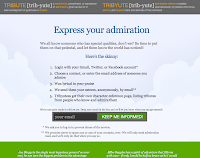 The first is a teaser website for an idea I had about expressing admiration for people you know, in such a way that over time an online character reference builds up, and the recipient gets an occasional boost when someone praises them.

The point here was just to test if there was any interest in the idea by asking people to leave their email to get notified later when the service goes live.

No ideas really about how to monetise it, but that wasn't the point of this one, it was just an idle thought that expressing admiration like that would be a nice thing to be able to do.

I registered a domain and pointed it at an app-engine web-app, thrown together with some simple html and css and a servlet. All in all just a few hours work. Its only just started to appear in google searches, so too early to say how the experiment will pan out.

The second experiment is something quite different. For some work-related research I'd been reading about affiliate-marketing.

I was aware of the Amazon affiliate system (indeed the book links on my blog are affiliate links), but I hadn't really considered that it was a common practice til now.

Zazzle's affiliate system allows anyone to set up a "store" under the main zazzle website, and populate it with their own products.

These products are customised versions of the products that zazzle themselves sell - ie. t-shirts, hoodies, decorated mugs, etc. You even get to set your own level of commission on each product. You can see one of my designs here :)

Zazzle help with tools for marketing your products too, but because its so easy lots of people have set up stores, and there's lots of competition. For me its really just a fun experiment, and a chance to do a bit of art work, so its all good really.

My main point throughout all this waffle is probably this: Stop trying to do something and do it! Create the smallest possible version of your product that can deliver value, release it, and use scientific measurement to direct your efforts for what to do next. If nothing else you will learn so much!

If you are involved at some level in the development of products, buy The Lean Startup - it will change how you think about product development.

While you're there, you might want to look at The 4-hour work week, which shattered lots of my illusions about how the world works, despite the fact that I don't like a fair number of the prescribed methods.

I'll leave you with this superb Lean Startup story of how a startup saved themselves millions of dollars with a $40 prototype:

Ignite: Lean Startup - Paul Howe, Founder & CEO of NeedFeed "How $40 Saved Us 9 Months and $2MM" from DreamSimplicity on Vimeo.